I am delighted that e-butterfly is up and running, and other bloggers have already noticed and commented on this resource.  e-butterfly is a Canadian-centric interactive data-base that lets you record butterfly species you see, build a virtual collection, keep track of your own ‘life list’, learn about other species, explore distribution maps, share with a broader community of like-minded people, and contribute to science and conservation.

Yes, “contribute to science and conservation“.  This site is an amazing resource where you can use your love of butterflies to do some real and important citizen science.

I’ve not yet contributed to e-butterfly, but I did enjoy reading this post from from Adrian Thysse about his experience working through the process.  It seems straightforward, yet still rigorous.  I certainly plan on submitting records this spring (and I will try to get my kids involved too… a perfect opportunity to include them in a science project that spans the nation). In fact, I can see a lot of ways that e-butterfly could be incorporated into public school education…

I am pleased about e-butterfly for another reason too.  One of the people behind this resource is my former Ph.D. student Maxim Larrivée. While in my laboratory, Max worked on a fascinating project about canopy arthropods (spiders, beetles), and studied how these assemblages were structured in the forests of southern Quebec. Max became an expert with my ‘canopy crane’ (pictured below) – not for the faint of heart! 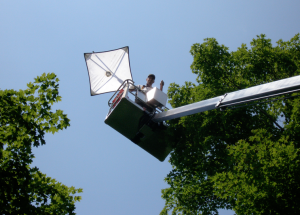 Max up in the canopy crane!

We are still working on some publications from his dissertation, but I am pleased that a few papers are already out, including work about general patterns of spider assemblages in the canopy , and this one about spider ballooning behaviour.

Max using a beat-sheet in the canopy (about 70 ft up!)

Max graduated a few years ago, and since leaving my laboratory has been doing a post-doc in Ottawa, first in Jeremy Kerr’s laboratory, and more recently, in a collaborative project with NatureServeCanada – and as part of that collaboration came e-butterfly.  I am really pleased for Max’s success, and I really think the e-butterfly site will take flight – it should.

Max is also an incredible photographer – you can view his work here: http://www.pbase.com/isotria

Last Friday, my Ph.D. student, Alida Mercado Cárdenas successfully defended her Ph.D.  Congratulations, Alida!  This is a really big event, and the entire laboratory is so proud of Alida.

Alida’s thesis is titled “Ecology of beetle assemblages in a Panamanian tropical forest with taxonomic notes on Curculionidae and Histeridae“.  Yes, it is about beetles in the neotropics.  Here are some numbers from her thesis:

40,000 beetles, 73 Families, 355 species or Curculionidae, 112 species of Histeridae.   In case you weren’t already convinced, the tropics represent the heart of biodiversity science. …so many beetles, so little time.  Alida, quite literally, looked at almost 40,000 beetles.  This is stunning, and astounding.   Here’s a photo of her with a small sample of these beetles, and she’s still smiling!!

Alida with a few of her beetles.

Alida’s thesis is ambitious, fascinating and contains some important conclusions:  a) from the beetle’s perspective it matters whether a rainforest is next to shade-grown coffee compared to a pasture, b) beetle assemblages are unbelievably variable in the neotropics – in fact, she often discovered as much variation between her traps within 100’s of meters of each other as between different locations, c) seasonality (i.e., rainy/dry seasons) influences beetle communities, and d) there are a lot of species still to be described – for example, of the 355 weevil species that Alida identified, less than half of these have a name.  To help with this significant taxonomic impediment, Alida collaborated with a beetle taxonomist (Alexey K. Tishechkin)  and described three new species of Histeridae.  This is a wonderful part of her thesis, and showed that it is possible to combine different disciplines – in this case, ecology and taxonomy.

We often hear that ecology and taxonomy are disciplines that fit well together, and I’m reminded of Nicholas Gotelli’s excellent 2004 paper, titled “A taxonomic wish-list for community ecology” (published in the Transactions of the Royal Society of London B).  Here’s a quote from that paper (downloadable from here):

…The best research comes from collaborations between taxonomic specialists and community ecologists who can bring both fresh ideas and fresh analyses to the table, and take advan-tage of the wealth of information that resides in museum and herbarium collections…

It’s one thing to collaborate, but something entirely different to be able to do both.  I would argue that relatively few scientists work effectively (and publish) in both fields – I have tried to do this a little bit, and worked for a couple of years on the taxonomy of pseudoscorpions.  I have, however, never really been able to fully immerse myself in taxonomic research, and I have yet to describe a species.   Alida has clearly succeeded where I have failed.  That’s inspirational, as is Panama:

The”official” defense that happened last week represents the end point of a long, productive, and lovely time with Alida being associated with the arthropod ecology laboratory.  I began at McGill in September 2002, and Alida came to do her MSc just a year after I started.  Her Master’s was about Carabidae (ground beetle) assemblages at and near the Morgan Arboretum, and she published two fine papers from this work – one about introduced Carabidae  and another about successional patterns .  After her MSc, Alida successfully entered McGill’s NEO program, and begin her PhD on beetles of the neotropics, with Dr. Hector Barrios as a co-supervisor.  The rest is a successful story of beetles, beetles and more beetles.

Alida is kind, caring, intelligent, motivated, and a very talented academic.  I am pleased (and proud) that she is officially finished at McGill, but I will also miss her. Congratulations, Alida, and good luck with your next adventure!

And to finish, here’s a photo of a weevil (an unnamed one): 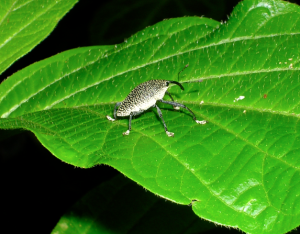 An unknown weevil, from Panama (photo by C. Buddle)

This is the second part in the series of “where are they now”, devoted to students from our laboratory who have moved on to other adventures (click here for Part 1).  I just could not resist writing about Zach Sylvain – Zach was a Master’s student in the lab a few years ago.  He did a fascinating project at the Morgan Arboretum, all about the effects of habitat variation on oribatid mite diversity.  His main research paper, titled “Effects of forest stand type on oribatid mite (Acari: Oribatida) assemblages in a southwestern Quebec forest” was published in Pedobiologia in 2010.

Zach was a terrific graduate student – he worked extremely hard, became an expert on identification of Oribatid mites (not an easy task) and wrote a high quality Master’s thesis.    After McGill, Zach headed west, and landed in Diana Wall’s “Soil Biodiversity and Ecosystem Functioning Lab” at Colorado State University:

Diana Wall is truly one of the lead scientists, globally, on the functional ecology of soil organisms.  It was a perfect fit for Zach.  In this laboratory, Zach’s Ph.D. is about the following:

His research into the community ecology of nematodes and oribatid mites focuses on drivers of their biodiversity such as soil moisture and the implications this diversity has for ecosystem functioning. Zach works at the Konza Prairie, Shortgrass Steppe, Jornada Basin and McMurdo Dry Valleys Long Term Ecological Research (LTER) sites. At these sites his research investigates how communities of soil animals are structured at varying levels of soil moisture, and how these communities respond to experimental manipulations of precipitation. This research investigates these trends at several scales and will provide insight into what consequences global climate change may have for belowground ecosystems.

Did you read that carefully?

Yes, it said the “McMurdo Dry Valley”.  Here’s a link to the broader project: http://www.mcmlter.org/

And, yes, that is in Antarctica.   Zach was able to travel to that incredible continent just over the past couple of month.  I am insanely jealous.  Although not known as being a biodiversity hotspot, Antarctica is nevertheless truly fascinating and home to a wonderful suite of invertebrates.

Zach was kind enough to let me use a couple of his photographs for this post.  This all looks very exciting and we eagerly await the results of his research!

I have decided to start a feature called ‘where are they now?’ – this will be about past students, and what they are up to these days.  A few years ago we had a keen, enthusiastic, and talented undergraduate student in our laboratory – Brigette Zacharczenko.  Many of you many know her by her popular on-line persona “weird bug lady” – the blogger and seller of amazing plush creatures.  She is AKA “the caterpillar wrangler”   I have one of her creations next to me in my office (yes, I am very lucky): 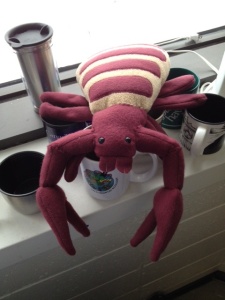 Brigette is now doing graduate school at the University of Connecticut in David Wagner’s laboratory.  Although we were sad to see her go, she left us a wonderful gift – our very own laboratory Logo.  You can go to Cafe Press at this link: http://www.cafepress.com/ecologylab and buy your very own t-shirt, mug, mouse pad, etc with our logo in place.  Really, we all MUST own a piece of Arthropod Ecology branding.  Perhaps a tattoo next?  Any takers?