This is another in the “meet the lab” series – here’s a feature by MSc student Chris Cloutier:

I can’t remember a time when I wasn’t fascinated by the world of creepy crawly things. For as long as I have been able to grasp and crawl I have been collecting and observing insects and spiders. Although my mother wasn’t always fond of the critters I would trek through the house, my parents were very supportive of my curiosities and did their best to nurture my interests. As a family we would go camping and fishing often, introducing me to the world outside of our backyard and ultimately landing me where I am today.
My passion for studying insects began many years ago with my first entomology course in CEGEP. After completion of that program I enrolled at Macdonald campus of McGill University. Before I even started my first semester I got my first real taste of applied entomology, when Chris Buddle hired me for several months during the summer to be his field and lab technician. Let’s just say that from that point onward I was hooked.

While studying at Mac I really started to discover where my interests were in this very diverse field. I was intrigued with the ecology and natural history of insects and the amazing things that they do. I really enjoyed learning about insect-human interaction, and for some reason I was very interested in disease transmission and parasitism and the amazing enzootic pathways they can take. 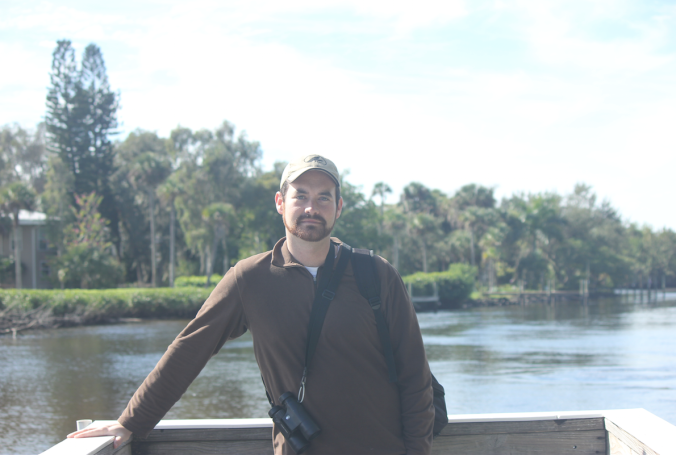 Chris Cloutier: the man, the naturalist, the legend.

My Master’s research began in early 2014. I had been working for several years at the Morgan Arboretum, a forested property owned by McGill, when my employer, and now co-supervisor, Dr. Jim Fyles approached me with the idea of performing some graduate research using the Arboretum as a study area. I jumped at the idea of doing this, and we got Chris Buddle on board right away. My thesis will be analysing the temporal variation of mosquito community composition across a habitat gradient which includes suburban areas, fields and various forested sites within the Morgan Arboretum. One of the reasons for this research is the fact that in many suburban and forested areas around Montreal, mosquito densities reach near intolerable levels during the summer months. This, coupled with the increasing number of cases of arbovirus (arthropod-borne viruses) infections, such as West Nile Virus, the importance of understanding where mosquitoes are located, and when, as well as which species are present is becoming more and more important.
Collection of mosquitoes takes place for 24h once a week for the entire frost free period, typically from April to November in Montreal. The traps I use to collect mosquitoes are quite specialized and are designed to capture only females which are seeking a blood meal (the ones that we worry about on our strolls through the woods!). These traps use a combination of LED light and carbon dioxide to attract the insects. The LED lights draw in mosquitoes from quite some distance, and the CO2, produced with the help of a few kilograms of dry ice, draws them ever closer to the trap. Once in range, a tiny fan sucks them into a mesh catch-bag and they are trapped. 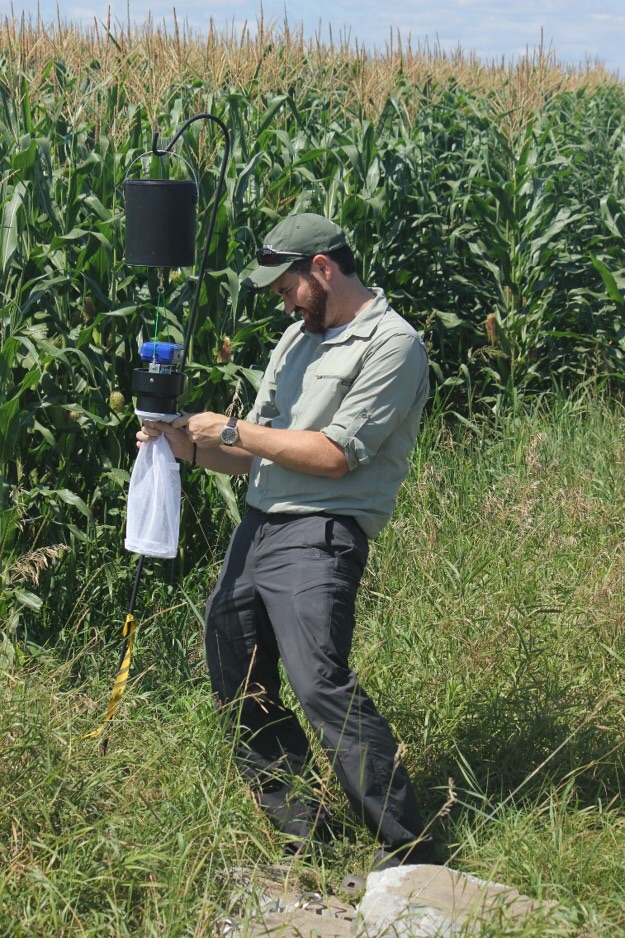 Chris in the field, checking a trap.

When not out in the field, I spend most of my time with my eyes firmly attached to a microscope, sorting, identifying, and counting mosquitoes. After my first field season, I have collected just over 43,000 mosquitoes representing 9 genera and approximately 28 species. I am now faced with the task of analysing the data and making sense of all those numbers, which in fact has revealed some interesting patterns already. I’m looking forward to heading out next spring to start all over again. 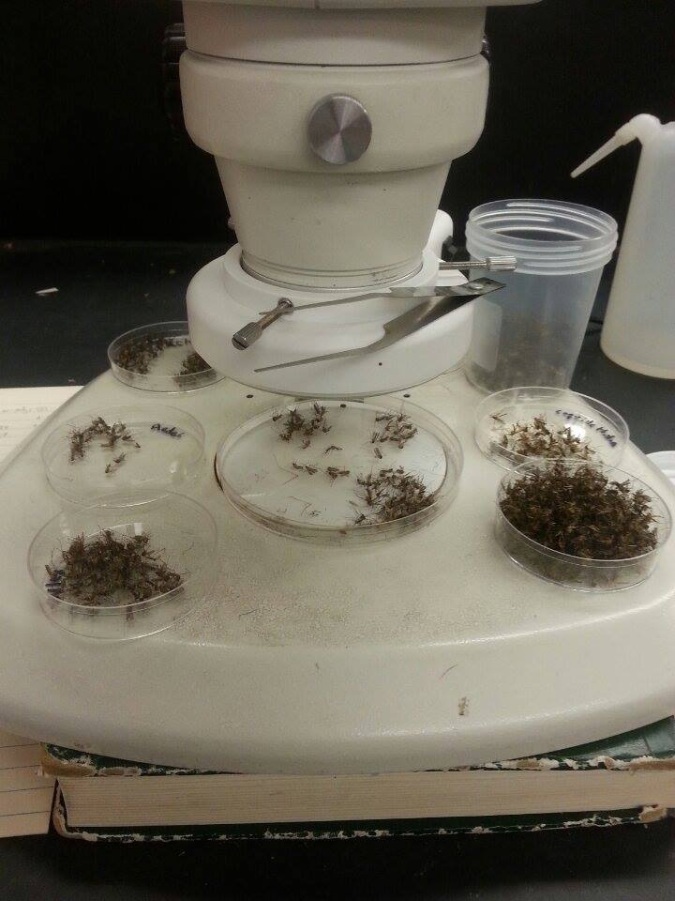 I consider myself to be a “geek of all trades” with interests in everything from birding, to plants, herps and pretty much everything in between. I rarely leave home without my binoculars, and during the summer I almost always carry some vials, an aerial net and several field guides (yes, I often get some strange looks…). I’m also a husband and more recently, a father too. My wife still hates mosquitoes but I feel her coming around slowly, and my daughter doesn’t know it yet, but she will be spending an awful lot of time outdoors with us.
Follow me on twitter @C_Cloutier15 or email me at christopher.cloutier@mail.mcgill.ca if you would like to know more about what I am up to and how things are going with my research.