This blog post is reproduced here, with permission, from the Spring-Summer 2012 Newsletter of the International Canopy Network.  Given the length of the article, I have split the newsletter into three separate blog posts – this is Part 1.

Canopy research in most parts of eastern Canada is in its infancy, which is somewhat surprising because I think many Canadians feel a significant connection to forests and to trees – you might even argue it’s part of our culture, along with ice hockey and maple syrup.   I have spent a lot of time doing research on arthropods in forests, but only relatively recently began to shift my focus upwards to the canopy.  The reason is quite straightforward:  when studying the biodiversity of insects and spiders in forests, you just can’t ignore the canopy!

As I moved (up) into canopy research, I had originally planned on doing some process-oriented, experimental food-web research in the tree crowns.  I was optimistic that I could go to the literature to find some base-line inventories and those studies would provide a starting point for my research.  I quickly realized, however, that literature on arthropod diversity in “northern” canopies was virtually non-existent (with the notable exceptions being the excellent research done in the temperate rainforest system of western Canada, e.g., Lindo & Winchester 2007, 2008 and related publications). It therefore became clear that the first years of this new research direction would be focused on descriptive biodiversity research.  This is not a bad thing as it allows for the kind of work entomologists and arachnologists love to do:  trap some bugs, identify them, complete a faunal list, and investigate diversity patterns.

Our laboratory has used two main methods of canopy access over the past six years: a mobile aerial lift platform, and single rope technique.  The mobile lift was acquired by a grant from the Canadian Foundation for Innovation.  It provides a safe way to get people into the canopy (its maximum height is about 26 m – which in our system, takes us to the upper canopy).  Its main limitation is that the lift platform has to be driven into a field site, meaning there must be a 2 m wide trail for access.  This means that selection of field sites, and individual trees, can be somewhat biased and limiting.  You could also argue that all our trees are on soft forest edges.    For that reason, we have more recently starting accessing canopies using the well-known single-rope technique.  It has the benefit of getting you to any tree you like, but can be limiting if the researcher needs to complete complicated tasks at the ends of branches.  However, we are finding the single-rope technique a valuable method for getting our work done in Quebec forests. 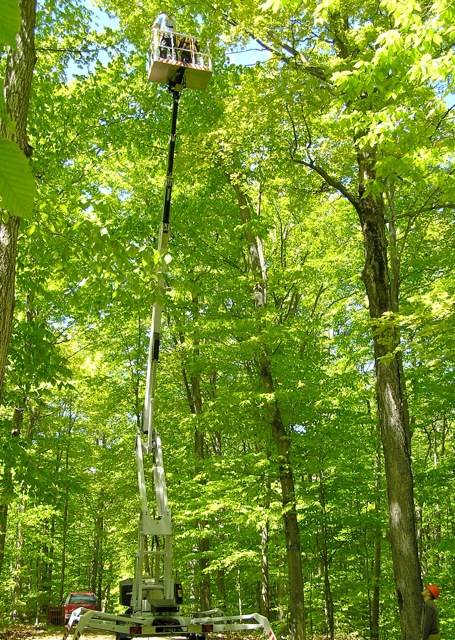 Stay tuned for Part 2, which will be about spatial patterns of diversity.

3 thoughts on “Arthropods in the tree-tops: Canopy ecology in Quebec (Part 1)”