This post was written by Michael Kent, with minor edits from C. Buddle. Michael is a naturalist at Killbear Provincial Park. Both Chris and Mike are very devoted to continue to improve the public image of Arachnids. This post by Mike will surely help…

More chelicera than cephalothorax, the Solifugae or “those who flee from the sun” look like a reckless arachnid bulldozer that could star in Mad Max. Otherwise known (incorrectly!) as camel spiders, whip scorpions, and my personal favourite baarskeerders (Afrikaans for beard cutters), solifugids are often one of the dominant arthropod predators in arid ecosystems. They ruthlessly chase, hunt, stalk, and scavenge using their leg-lengthed pedipalps to snatch prey while using their jaw-like chelicera and digestive juices to masticate their invertebrate and small vertebrate victims to a pulp. 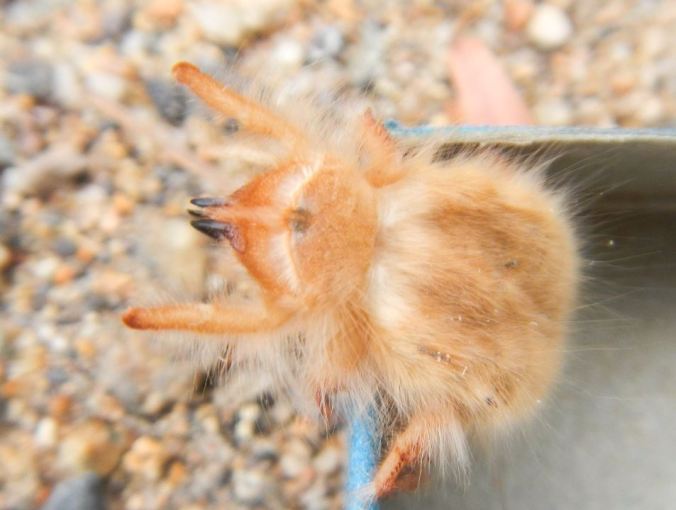 Competing for one of the cutest arachnids is this Teddy Solifugae (Hexisopus sp.). Not just for petting, the fuzzy mat of hairs covering its body are mechanoreceptors capable of detecting miniscule changes in temperature, humidity, and air movement. Photo by M. Kent.

Like most arachnids, solifugids don’t get much positive media attention. Famous on the internet by “forced perspective” photos makes them appear to be much larger and scarier than their modest 15cm maximum. There is even a photo of an intimidating, solifugid-like creature constructed by a talented invertebrate artist that has many fooled. As formidable as they look, they are likely non-venomous, with bites being rare and only resulting in localized pain and swelling in humans (Naskrecki, 2012).

When it comes to cuteness in the arachnid world, salticids are the reigning champions with their captivating eyes and fancy footwork. Normally ranking near the bottom, solifugids have a new challenger for the world’s cutest arachnid with the teddy bear solifugid family, the Hexisopodidae. Observed while on a trip to Namibia in January, this family is endemic to South Africa and look more like “baarskeerdlers” (beard cuddlers) rather than a baarskeerders. Surrounded by an arid lunar landscape, one was observed slowly waddling (extremely atypical for most solifugids) in the dry, sandy riverbed in a gorge in Damaraland.

Also known as mole solifugids, as soon as it sensed us, it buried itself beneath the sand and disappeared. A member of the family Hexisopodidae, it is characterized by adaptions to a mysterious subterranean lifestyle with fossorial 2nd, 3rd, and 4th legs, with the 4th lacking tarsal claws (Savary, 2009). Overall, not much is known about the life history of the Solifugid order other than some broad generalizations based on detailed observations of just a little more than a handful of different species. 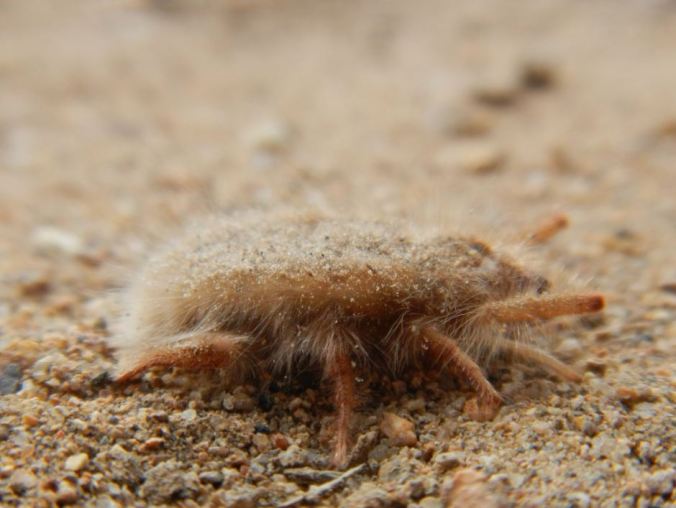 Not meant for speed, solifugids in the Hexisopodidae family are equipped with fossorial 2nd, 3rd, and 4th legs. Photo by M. Kent

From what we know solifugids typically only live one year or less, and burrowing is an important part of their life. When they’re not spastically running about searching for food, burrows serve as a daytime refuge providing proper humidity, a safe retreat from predators, or protecting during vulnerable times when molting, digesting, or depositing eggs (Wharton & Reddick, 2009). Eggs take anywhere from 2 days to 2 months to develop into larvae, dispersing at the 2nd instar, and going through 4-8 nymphal instars before becoming an adult (Wharton & Reddick, 2009). It is unknown whether the Hexisopodidae have similar life-history traits. How much time do they spend underground? Why do they go underground? Do they hunt for food by searching in the sand or ambushing?

One of only two known genera in the Hexisopodidae family – Chelypus and Hexisopus – can be morphologically distinguished from each other by the presence or absence of well-developed spines on the pedipalps. Photo by M. Kent.

Solifugae taxonomy is messier than a cobweb. Whether solifugids share a more recent common ancestor with pseudoscorpions or mites is still debated. They all share certain features of the mouthparts. Solifugae and acariform mites have a potential synapomorphy in their sejugal furrow, while solifugae and pseudoscorpions share several characters such as similar tracheal respiratory systems (Dunlop, & Penney, 2012). The solifugae Order consists of 12 families, 141 genera and 1095 described species (Savary, 2009). However, some families are too arbitrarily defined and lump genera, while others are too narrowly defined and split genera creating a phylogenetic cobweb. Revising solifugid systematics needs to start from the ground up.

Recently, a team of researchers funded by the American Museum of Natural History did just that and presented a comprehensive analysis of cheliceral morphology for Solifugae by taking high-res images of the jaws of 188 different species, comparing them with existing literature, and identify and reinterpreting structures based on primary homology. It is crucial to be on board with the same jaw terminology because it is an important morphological character set containing relevant information for identification and sexing (Bird et al. 2015)

Solifugids also share various other morphological characters including malleoli and suctorial organs. Chemosensory malleoli or racuquet organs located on the underside of their 4th pair of legs. Analogous to scorpion’s pectin, the series of fan-like structures is thought to play an important role in the detection of food, predators, and mates (Punzo, 2012). The suctorial organs located at the tip of the palps are used to apprehend potential prey and climb vertical surface. The latter was observed as a solifugae was observed clinging to a window near the Monteverde Cloud Forest in Costa Rica.

One of only a handlful of solifugid species found in wet, tropical environments. This solifugae was observed in the Monteverde Cloud Forest clinging to a window using its sutorial organs. Photo by M. Kent.

Solifugids are even found in Canada! At the northern limit to their range, suitable semi-arid habitat is found in the coulees and badlands of Southern Alberta, in the cities of Lethbridge and Medicine Hat, Southern Okanagan Valley of BC, and a Southern Saskatchewan (Johnson, 2004).

Next time you are visiting arid parts of the world, do watch out for these fascinating Arachnids. They are worthy of our attention, especially since so much of their natural history remains unknown. Cuddle up to “baarskeerdlers”, and be amazed.

Text and photos © M. Kent (not to be reproduced without permission)

Equipped with the largest invertebrate jaws for its body size, solifugids don’t need venom. They masticate their victims instead, relying on their huge head muscles to power their exoskeleton crunching chelicera. Photo by M. Kent.

2 thoughts on “The natural history of teddy-bear solifugids: cuddly wonders of the desert”