It all started with the crickets.

And it got a lot bigger than that.

I couple of weeks ago I received a gift from one of my MSc students – a lovely little tarantula that we affectionately call “Shelob”. My family was reasonably tolerant of this new addition. Shelob is a Chilean Rose-hair, a sort of pet that is sometimes referred to as a pet rock. But it’s a rock that needs feeding, hence the crickets. “Feeder crickets” are crafty little insects and despite my assumption that the terrarium for the crickets was sealed tightly, that was not the case. Unfortunately we had guests over for the weekend, and they were unimpressed by the cheeping crickets from under their bed in the middle of the night. And my teenage son was very angry one morning, having been woken up a bit too early by crickets in his bedroom*. The crickets were everywhere: 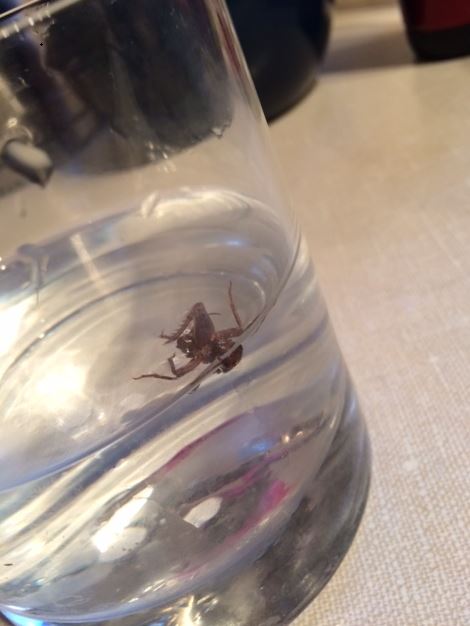 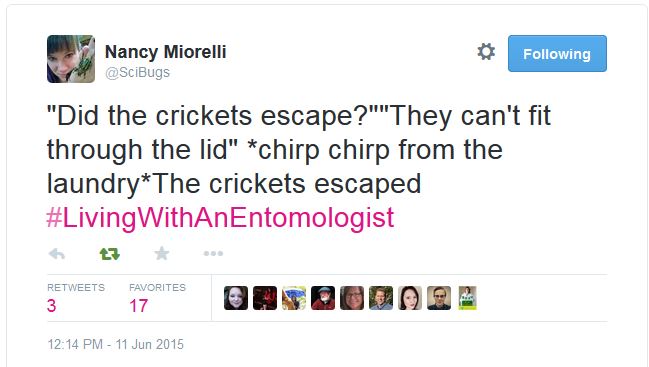 I’m not the only one with a cricket problem.

Living with an Entomologist (or Arachnologist) can be a challenge. It requires our partners / families / roommates / friends to be very tolerant of some odd behaviours. In my experience entomologists really know how to bring their work home with them. Our field of study is a passion that moves beyond the research lab or field site. It’s a passion that means we need to have sweep nets at home as well as at work, and most entomologists I know have a vial (or two) in their pocket, so they can collect their study specimens wherever they are (although we sometimes forget). This means, by extension, that our freezers at home become a place for frozen food AND dead insects. This is clearly something that is shared with entomologists around the world (which means, of course, that there are thousands and thousands of freezers in homes that act has a short-term specimen storage location as well as a place for ice cream and frozen peas – that may either impress you, or creep you out). 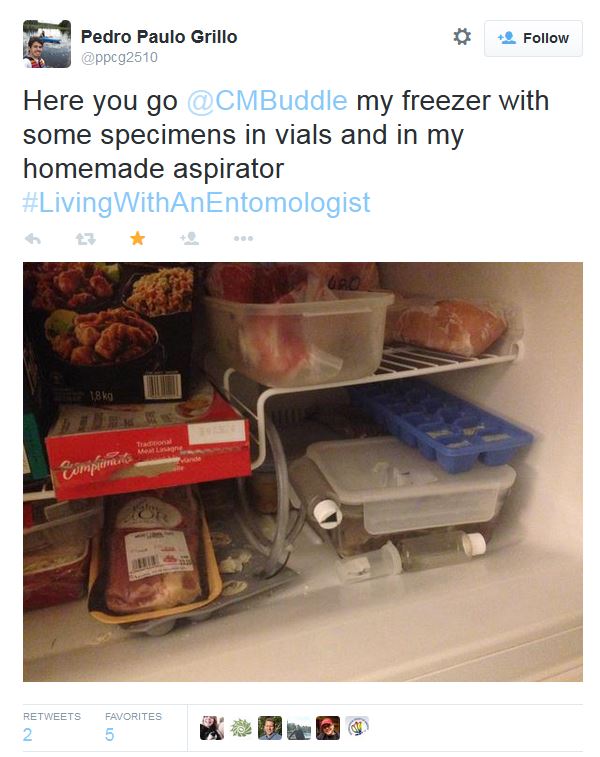 A typical freezer: note the food AND the vials with dead insects.

Another generality that emerges from these Tweets is that our partners, friends and/or families often have to be our ‘helpers’: holding up a thumb for scale, being a good landing spot for mosquitoes, or holding various entomological equipment while we scramble on hands and knees to grab that elusive specimen. 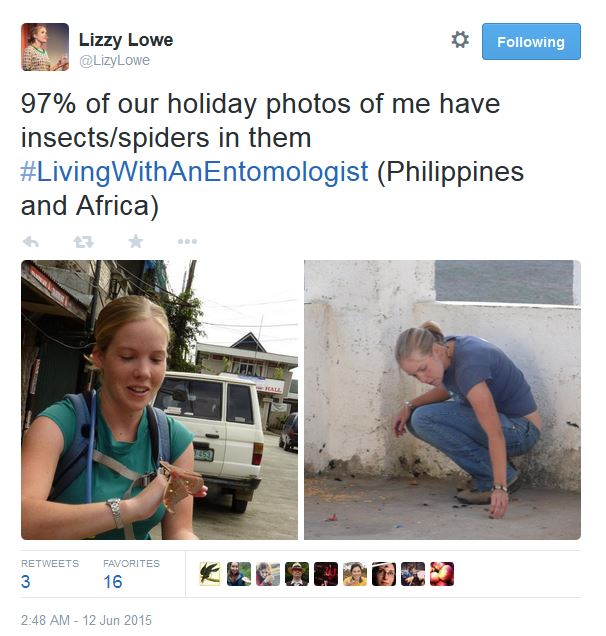 Holidays? They sure are fun when living with an entomologist…

The division between “work” and “play” is a difficult one to make for entomologists: there is a single-minded joy associated with collecting our study species, no matter where you are (honeymoon?) and no matter the time of day. It’s actually quite fun to run around the backyard with a sweep net, chasing *that* butterfly. A few years ago I recall seeing a very lovely butterfly heading from my backyard to the front yard – I was barbequing (in bare-feet) at the time – thankfully the trusty sweep net was right next to the house. I made a dash for it, hooting and hollering the whole time. The butterfly was quick – so much so that it was about 200 ft up the street before I collected it. My neighbors then became very well aware of what I “do”: the barefoot entomologist.

The final personal anecdote I will share is the “Specimens on the doorstep” phenomenon, shared among many entomologists: once you are known as the “bug person” in your town or city, BEWARE – people will drop off mason jars with odd critters in them. You know, the beetle that is eating Samantha’s roses, or the ant found in a neighbor’s dishwasher. So often I come home and one of my kids says to me “Dad – there’s another jar for you on the kitchen table”. I guess this isn’t all that normal…? 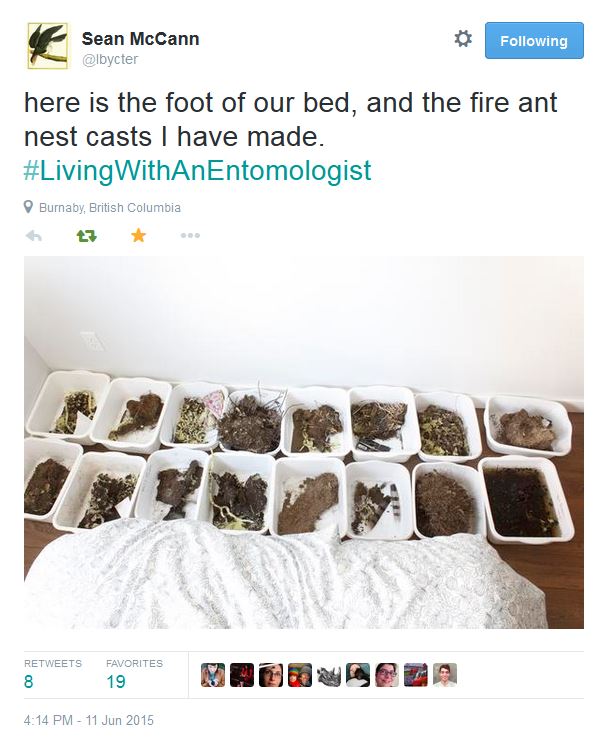 Fire ants at the foot of the bed. Oh my.

The hashtag #LivingWithAnEntomologist certainly took off: It’s clear that this concept hit a nerve, and that my own observations were actually quite general. SO many people tweeted their stories about what it’s like to live with an entomologist. Thank you to a most wonderful community of friends and colleagues.

To my dear and loving family: I’m sorry (But not really).

* Note: I have some minor hearing loss, and despite EVERYONE telling me about chirping crickets in our house, I just don’t hear them. Lucky me, I suppose.

2 thoughts on “It started with the crickets”