It’s been a long winter but it’s ending quickly.

March brings anticipation in this part of the world. This past week was a reminder of that, and we saw temperatures above freezing for several days in a row. The ‘big melt’ has started… dozens of tiny trickles have appeared beside roads, guided by gravity. I know these small streams are also meandering under snow banks. The snow banks themselves have begun their own transformations: looking closely reveals tiny peaks and valleys, with embedded pebbles and rocks being released from an icy grip.

The birds have noticed: for much of February I marvelled at puffed up chickadees and juncos desperately seeking seeds at the backyard feeders, huddling together through many freezing weeks. They made a few cheeps and chirps, but nothing like the past week. It was truly delightful to listen to the chorus of cedar waxwings feasting in a crabapple tree, and a male Cardinal singing with spring’s true enthusiasm. And the true harbinger of spring appeared on a frozen branch outside my office: the robin. How I missed you, dear friend!

I imagine all the smaller creatures stirring underground, under-leaf and under-bark. The protection of winter’s white blanket is ending. Perhaps super-cooled, or perhaps frozen, insects, spiders, frogs and salamanders are stirring: the days are getting longer and the time for popping up and peeping, foraging and feasting, is about to start. I eagerly anticipate the first sighting of a morning cloak, flying in forests much earlier than its cousins. I marvel at seeing that butterfly before the flush of greenery (although the buds are swelling, and ready to burst, soon after the cloak passes). The south sides of all buildings are ahead of the rest: tiny ribbons of ground and soils appear and despite snow within inches; greenery pushes up. 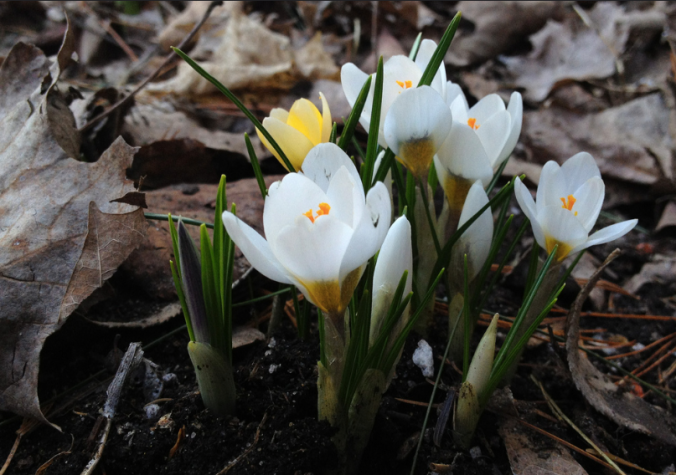 March is exciting every year. It is fresh, crisp and cold in the right way: the refreshing way. The sun’s rays are getting longer, and warming up shoulders as Canadians shed their toques and grab their rubber boots.

Sure the forecast calls for a bit more snow, and the furnace still kicks in with regularity, but the land, house and yard are in a state of anticipation:

One thought on “Anticipation”