This is another in the series of “Meet the arthropod ecology lab“: Meet PhD student Shaun Turney, and a neat project he’s been working on…

I joined the lab in September and I’ve been really enjoying my first months as a PhD student. I haven’t done any field work yet so that means no specimens to ID or field data to crunch. Instead I’ve been occupying my time very happily playing on the computer. I recently released an R package on CRAN for Fuzzy Cognitive Mapping called “FCMapper”, in collaboration with Michael Bachhofer. It is based on FCMapper for Excel, distributed at http://www.fcmappers.net/joomla/, developed by Michael Bachhofer and Martin Wildenberg. Fuzzy Cognitive Mapping is really cool and you should try it out! 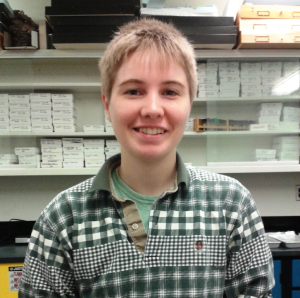 Shaun, in the lab, thinking about food-webs.

My latest favourite graph theory tool is called Fuzzy Cognitive Mapping. It can be understood by breaking down the term into its component words. A “cognitive map” in this case is when you represent a system as interconnected concepts. Boxes and arrows, in other words. The “fuzzy” part refers to fuzzy logic. Fuzzy logic is logic that deals with approximate rather than exact values. So to make a fuzzy cognitive map, you make a box and arrow diagram and assign approximate values to the arrows (positive vs negative, weak vs strong relationship). The concepts are then allowed to affect each other until they come to an equilibrium. The exciting part is that then you can try out scenarios! For instance, you could fix one (or more!) concept to be a high or low value and see how it affects the rest of the system. In the context of ecology, one use is to explore potential ecosystem management scenarios (ex, http://en.vedur.is/media/loftslag/Kok_JGEC658_2009.pdf).

If Fuzzy Cognitive Mapping sounds interesting to you (and it should!), you can download the package from CRAN. Michael Bachhofer and I plan to create a tutorial in the spring, but until then you are welcome to email me if you can’t figure out how to use the package.

A graphics output for a toy example I was playing with the other day. It is a cognitive map of things which might affect spotted owl abundance. FCMapper uses igraph for visualization. The thickness of the arrows represents the strength of the relationship and the color represents the direction (red=negative, black=positive), as assigned by me. The size of the circles represents the “size” of each concept at equilibrium, as determined using the nochanges.scenario function in FCMapper. Think of the fun maps you could make for your favourite study system!