These interactions are ongoing, all the time, in forests around the world. These forests, however, are changing in important ways. Some of them are getting smaller and smaller as humans continue to encroach on the land, via urbanization or agriculture. This results in a ‘fragmented’ landscape. A landscape with small forest patches, perhaps no bigger than your back yard. A landscape with larger forests, perhaps one in which you could get lost in. These forests are themselves connected to each other –sometimes directly by a corridor or hedgerow.

This is the context for PhD student Dorothy Maguire’s research. Within that context, Dorothy tackled a fascinating project, one that was just recently published. In this work, Dorothy and co-authors (including me, an undergrad at that time, Thomas Nicole, and McGill Professor Elena Bennett) put cages around small trees in different types of forests SW of Montreal. The cages (made of chicken wire) were in place to test the effects of ‘predator exclusions’ on the insects and spiders occurring on saplings. The prediction is that if you exclude larger predators, such as birds, this may allow a ‘release’ of other insects and spiders. In turn, this release may have trickle-down effects on an important process occurring in young trees: herbivory. For example, if a predator is more common because it’s not being eaten by birds, perhaps it will eat more caterpillars, which may mean the leaves on trees will be eaten less frequently. In ecology this is dubbed a ‘trophic cascade’. Dorothy did this work in the context of fragmented forests, and she worked in forests that were either small and isolated from other forests, or in forests that were large and connected to other forests. This was done because there’s an expectation that these ecological effects will be different depending on the degree of fragmentation happening on the landscape. For example, insectivorous birds may decrease in abundance in small, isolated patches, which means their effects on insect prey (and perhaps herbivory) may be reduced relative to effects in larger patches of forest.

During one summer field season, Dorothy and Thomas wrapped up some small sugar maple trees in chicken wire, left some alone as controls, counted insects and spiders over the summer months, and measured herbivory on the trees themselves. As expected, the effects of the ‘cage’ was significant: when you put a cage around a tree, you end up with more arthropods living on those trees. This confirms other papers which report a similar effect: insectivorous birds (and perhaps other vertebrate predators) have a significant, and meaningful impact on the insects and spiders living on trees. Or, stated another way, birds eat critters living on trees, and without these birds, there would certainly be more arthropods around!

Dorothy did not uncover a strong effect on the process of insect herbivory: although more insects and spiders were living in the trees protected by chicken wire, the leaves themselves were not affected. This could be because more insect predators were around, and thus compensating for the lack of birds, and eating just as many herbivorious insects (e.g., caterpillars) as the birds might have eaten. 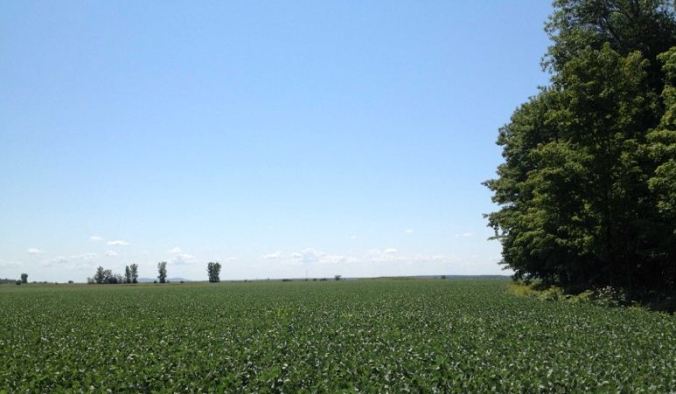 The lanscape of southern Quebec. Lots of agriculture, some patches of forest.

As with all research projects, this work resulted with as many questions as answers, which is equally frustrating and fascinating. It’s clear that vertebrate predators are important in these systems, but more work is needed to fully assess whether these effects are truly affected by the degree of forest fragmentation on the landscape. The lack of effects on the process of herbivory itself was equally intriguing – there are clearly many complex interactions occurring on small maple trees. Some of these interactions involve top-down predation events, but there are likely a suite of ‘bottom-up’ effects that are also influencing the system.

One thought on “Trophic cascades in fragmented forests”