Earlier this week I was back in Ottawa at Canada’s National Spider collection with a couple of enthusiastic students from the lab. We were doing more databasing, which involves reading old labels and entering the information into a database.

Sound boring?  Nothing is further from the truth. It’s an amazing way to spend time, here’s an example: 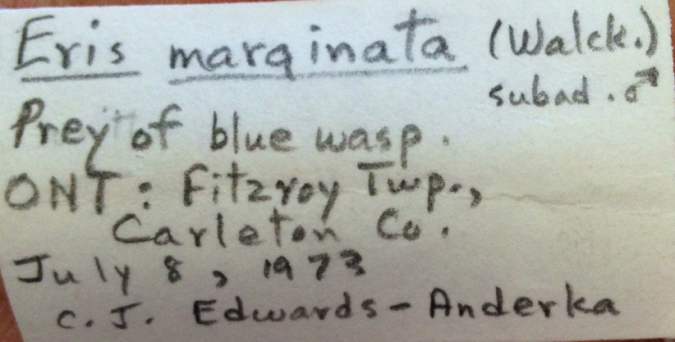 Yes, that label for a jumping spider species provides more than a name, locality and date. It provides a story. It confirms that spiders are hosts for parasitoid wasps, and it documents an ecological interaction; one that is stamped in time and place.

Every single specimen in a museum or research collection tells a story. There are untold riches on little pieces of paper linked to biological specimens. In addition to the usual name, place, and time, label data gives us varied and fascinating ecological stories. Here’s another one: 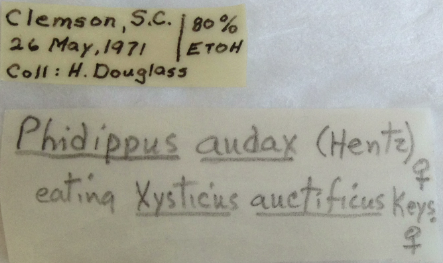 Yes, more evidence of one spider species preying upon another species. Intraguild predation, recorded and placed in a vial.

I love this next one – in part because you now know that bluebirds eat jumping spiders and that Arachnologists can identify the species based only on the male palp (that is all that was in the vial, it’s the little spider ‘bit’ at the bottom left). Um, I suppose the bird got the rest of the specimen!:

Label data can tell incredible stories!  Here’s a nice set of labels that show how Phidippus jumping spiders really, really get around:

Label data also provide insights into the characters of scientists. Below is an example of three different individuals all identifying the specimen as the same species. The three scientists, by the way, are preeminent Arachnologists in North America – I would trust any one of their identifications, but clearly they were not entirely sure, and all three had a look to confirm the identification. Three votes from Dondale, Maddison & Edwards, in three different decades! Yes, it’s Phidippus audax: 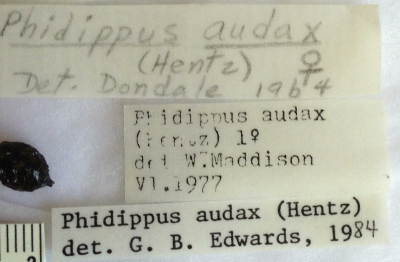 Label data provide an important historical context.  I was thrilled to see this label from 1917 collected by none other than Norman Criddle (Criddle is well known to Entomologists in Canada):

Label data provide opportunity to discuss, imagine and be inspired by biodiversity. I identified a species of jumping spider from a place called Sable Island. The species is one of the most attractive spiders in North America, Habronattus decorus. 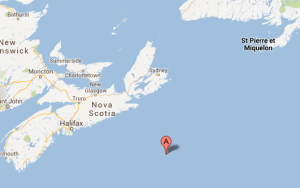 So… the questions start. How did it get there? Presumably ballooning? Are these lovely critters still on Sable Island? What is the fauna of Sable Island? Is is a stable fauna? An old vial, stuck in a cabinet in Ottawa, opens to door to questions of dispersal, biogeography and biodiversity.

I think the message is clear: databasing provides a rich opportunity to paint a picture of a species, over time and over space.

But here’s the problem: there are about 2700 vials of jumping spiders to database. Each one takes about 3 minutes to database, meaning it would take about 135 hours of work to database only 1 family of spiders, in one collection! And working in the collection is not free – paying students, travel time, lodging, etc. all take time and resources.

So far our laboratory got through about 400 specimens (15% of the Salticidae). We have barely made a dent.

This is an undeniable problem: We must capture these data and make them available for scientists to use.

How can we understand biodiversity change when most of our historical data are not yet digitized?

How can we begin to understand biodiversity patterns without knowing what is where, and when?

When I wrote my previous post about the Canadian collection, I was pointed to Notes from Nature – an on-line resource where databasing is crowdsourced. This is a pretty neat idea – label data (and specimens) are photographed, uploaded to the site, and anyone in the world can transcribe the data.  It allows anyone with an interest in biodiversity to reach into a collection and learn the stories from the specimens.

I am hoping to try this out with spiders from Canada’s national collection. While in Ottawa, I tried taking photos of specimens, and tracked how much time it takes. It turns out it takes about 2 minutes to photograph the specimens and label. You must take out the spider, the label(s), arrange everything carefully and take photo(s). It then takes about 1 minute to edit the photo, and about 1.5 minutes for someone to enter data into a computer from a photograph instead of from the specimen itself. So, total time for databasing is 1-2 minutes longer than sitting in the collection and doing the databasing. The benefit, of course, is that there is good potential to actually get a collection databased from afar. Here’s an example of a photographed label and specimen, after editing:

Question: would YOU help database if you could go on-line and see these kinds of images? Does it grab your attention? Even if 20-30 people agreed to database 75 or so specimens, each, the Salticidae would be done! (and, of course, someone would have to take images, and edit them beforehand).

I am keen to have your feedback…. I want to know if it’s an idea worth pursuing.

Do you want to learn stories from specimens?