Population and Community Ecology is an introductory undergraduate course at McGill University and each lecture typically starts with an x-axis and a y-axis drawn on the chalkboard – something like this: 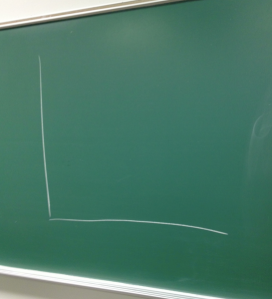 Chalk board, with x- and y-axis. The start of every lecture.

The course is taught from a quantitative perspective, and it uses equations, models and graphs to cover concepts ranging from logistic population growth, to metapopulation ecology and estimating species diversity.  The class uses Gotelli’s “A Primer of Ecology” as the text – a book that walks through many ecological concepts from first principles. It includes calculus, probability theory, statistical distributions, and null models.

It was therefore fitting that the ‘E.O. Wilson versus Math” debate was discussed during lecture last week.  Students were asked to read Wilson’s piece in the Wall Street Journal, and read some of the blog posts that reacted to this, including Jeremy Fox and Brian McGill‘s posts on dynamic ecology. Students were also asked to look at some of Terry McGlynn’s writing over at small pond science, and to come to lecture prepared – to have opinions and be willing to discuss these opinions.

For those not fully aware of this debate, here it is in a nutshell: Wilson argued that a ‘deep’ understanding of math may not always be prerequisite for doing great science, or at least may not be required for generating big ideas and concepts. Wilson was in part trying to encourage people who are ‘math phobic’ that this phobia needs not be a reason to stay out of science.  Not surprisingly, this stirred up a lot of debate (and some of it was rather harsh!), and the debate was particularly interesting from the perspective of Ecology since this discipline has always struggled with this topic (see Terry’s excellent post about tribalism in ecology for some perspectives on this).

Here is a summary of the key points that were discussed during lecture – and let’s just say that a 50 minute lecture slot was NOT enough time for this topic! (by the way, there were between 50 and 60 students who attended this  lecture, and the class is comprised primarily of students studying environmental biology).

Many of the students were surprised at the tone and overall discussion points that emerged from Jeremy Fox’s post – they argued that when they read Wilson’s piece, they didn’t feel the intended audience was ‘established’ ecologists – but rather the post was meant for students at the start of their careers. Some of them found the blog posts way over the top, and the academic discussions took away from the main message.  Some felt that Wilson was arguing in part about the need for freedom to think without any boundaries (mathematics, or anything else).  Creative thought need not be constrained, and students coming up through the system, whether they are math literate or not, should never fear heading into science (indeed, some confessed that an increase in math courses may have driven them away from biology altogether).  Related to this, mathematical models all require assumptions (we talked a LOT about this when working through Gotelli’s book!), and any assumptions are limiting and could distract from thinking out of the box about any topics, including ones that are ecological. These students worried that the constraints imposed by math could force ecologists to view the world through a particular lens.

That being said, many of the students also agreed that a deeper understanding of mathematics was absolutely required for ecology – especially since the world is complex, with complex problems – problems that require multiple disciplines to solve.  However, while these disciplines include mathematics and biology, they also include literature, history, environmental policy, and more.  What a solid argument! And it was great to see that argument expressed by 20 year-olds.  Yes, math is important, but it is one tool that we need in this world, and it’s not necessarily more important than other tools.  While some ecologists are strong in math, others may prefer to hone their policy skills, for example. Ecology’s strength, in part, is in its ability to bridge different disciplines and students expressed how ecology is actually a ‘great uniter’ of biology and math (and other fields, certainly some areas of ecology draw upon a range of ideas from sustainability science, medicine, economics, history, etc).

The students also expressed concern about how mathematics is taught, from elementary school all the way to University – they expressed how learning mathematics in isolation of other topics is ‘ok’ for individuals with an intuition and natural ability with math – but many students felt that a better way to learn about math was applying it to the ‘real world’. The application of mathematics is the best route to learn mathematics. Ecology was again touted as a perfect example of a discipline in which application of mathematics is clear – from predicting distribution of invasive species to modelling species richness in fragmented forests.  For some students, math was not a subject they initially enjoyed, or strove to learn – it was ultimately through their study of ecology that they began to value math as a tool they could use to support their discoveries, and lend credibility to their work.

By in large, students agreed that mathematics was required for ecology, but there was certainly debate about how much was enough – whether it was enough to use mathematics as a tool, or that perhaps mathematics was more like a language.  A language in which fluency is required so all the nuances can be understood and that the full meaning is in place.  From those advocating mathematical “fluency”, there was a strong opinion that like languages, mathematics can be learned with hard work and focus (yes, they agree with Wilson on this point!) – this opinion comes with a wealth of experience in the classroom at McGill since many of the students are mother-tongue French and have learned English after coming to McGill.  In other words, if you can learn a language you can also learn math.

The final argument put forward by students was that this entire discussion about Ecology was from a very narrow perspective – what about the role of traditional ecological knowledge?  Ecology is a much older discipline than Clements, von Humbolt, Haeckel, or even Aristotle. Throughout history, humans have been interacting with their environment, and have been observing nature.  By this act, humans have been counting, developing models, and making predictions… for thousands of years.  Linking mathematics to nature is very, very old.  Ecologists ought to pay more attention to other ways of looking at the natural world, other ways to visualize, predict, observe and count. Although this is certainly not the same kind of math as presented by Gotelli, perhaps it could be as insightful.

In sum, the discussion with undergraduate students on this topic was insightful, fascinating and important. There was clearly a strong appreciation for the role of mathematics in ecology, but also different ideas about the degree to which a deep understanding of math is required – which often related back to the students own struggles with, or aptitude for, math earlier in their studies. It was validating to hear that they appreciated using Gotelli’s book to learn the foundations of ecology, and recognized that ecological models can be both limiting and liberating.

12 thoughts on “Ecology and Mathematics: perspectives from undergraduate students”