Cousins of other Arachnids, but an Order all to their own.   Over the past 11 months, I’ve been on a journal of discovery about these amazing creatures.

After nearly 300 tweets, and over 600 pages of text in Pinto-da-Rocha et al.’s book on Harvestmen, the Opiliones Project (in the way it was originally conceived) is over.  To recap – this was a twitter-based project in which I shared content from that weighty textbook with anyone who cared to follow along (using the hashtag #OpilionesProject).  Many folks followed along, notably my twitter friends Derek Hennen, Jaden Walker, Matthew Cobb, and many, many others… 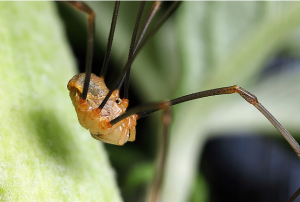 A lovely Harvestmen – photo by B. Valentine, reproduced here with permission

I learned a lot along the way – and will take this opportunity to highlight ten fun facts about Harvestmen – all of these were part of the Opiliones Project.

Did you know that…

1. Salvador Dali featured Harvestmen in his work!  It’s true – check it out: “Daddy Longlegs of the Evening”

2. Harvestmen can breath through their legs!  Spiracles in harvestmen are located just posterior to the coxae of the 4th pair of legs and this supply of oxygen to Harvestmen legs (e.g., after they are removed) contributes to the duration of twitching

3. Harvestmen have been around for at least 400 million years!  Phenominal!  And Harvestmen from the Rynie chert have an extensive tracheal system – the oldest record of such tubes of ANY arthropod

4. Harvestmen are NOT venomous! They don’t have venom glands!  A common urban myth.

5. Over 60 chemical compounds have been isolated from Harvestmen secretions (e.g., the secretions that are often used in chemical defense)

6.  At least a dozen species of Harvestmen are known to be parthenogenetic (females lay eggs that produce only females)!

7.  Harvestmen often show aggregation behavior, and the largest aggregation recorded is 70,000 individuals on a candelabrum cactus!

8. Unlike other Arachnids, Harvestmen males have a penis!

9. In some Harvestmen species, males use their chelicerae to offer oral secretion to female – a type of nuptial gift!

10. In some species, Harvestment moult even after they are have reached adulthood!

So there you have it.  Many fascinating and fun facts about Harvestmen (and there are many, many more) – you can access all the tweets from the Opiliones Project here (all 24 pages of them).

There were some other notable Harvestmen events over the past year, and it was fortunate this project coincided with these events.  For example, the Taxonomy Hulk burst onto the scene, and highlighted an article depicting a mix-up between a spider and a Harvestmen (a common mistake…).  Also, a truly HUGE harvestmen species was discovered – this sucker had a 13 inch legspan.  As May Berenbaum said over twitter…that’s a Daddy Loooooonglegs!

So, to finish – a big THANK YOU to everyone who followed along.  I hope this project was a fun for you as it was for me.

Another lovely Harvestmen, photo by B. Valentine, reproduced here with permission.

A special thanks to Brian Valentine for permission to use his Harvestmen photos on this blog!