Today I am excited to report on research published with Ann Rypstra, a most wonderful person and exceptional spider ecologist.  Here’s the take home message from our paper, titled  “Spider silk reduces insect herbivory” (Rypstra & Buddle 2013):

In the presence of spider silk, insect herbivores eat less plant material  – and the spider doesn’t have to be around to see this effect!

A spider’s web, made with silk. Photo courtesy of M. Larrivee (reproduced here, with permission)

Here’s a plain-language summary of the research:

Spiders are important in agricultural systems because they eat many insect pests that in turn eat valuable crops.  Spiders also leave behind silk as they move through an agricultural field – sometimes this silk is there because it was part of a web that was constructed to catch prey, or sometimes spiders leave silk in the form of a ‘drag-line’ – a kind of silk that acts as a safety-line for a spider.  Whatever the means, the agricultural landscape contains plants, their insect pests, spiders and spider silk.  In this work, we wondered whether  silk, in the absence of a spider, would still cause the insect pests to be wary, and feed differently than if there was no spider silk in their environment.

We used laboratory and field-based experiments for this research, and we used two pest species – the Japanese beetle and the Mexican bean beetle.  These pests were allowed to eat either leaflets or whole plants of bush-style snap beans.  The plants or leaflets were either left alone, or were adorned with five strands of spider silk or with five strands of silkworm silk.  We included the silkworm silk (i.e, produced from the silkworm moth) because we were curious about whether the beetles might respond to ANY silk instead of silk produced specifically by spiders.  To extract the spider silk, we allowed a long-jawed orb-web spider to hang from its drag-line, and we wound its silk around a stick as the spider bobbed up and down – in this way we could get enough silk for the experiments. We found that when spider silk was on the plants, the insects inflicted less damage compared to when there was no silk.  The silkworm silk also caused the insects to feed less, but the effect with silkworm silk was less than with spider silk.  We also wondered whether this response could just be because the silk got in the way of the beetles, and so we did some experiments with human hair, and a strand of kevlar – these are both ‘silk-like’ strands but since they did not come from an insect or spider, would only represent the physical nature of the silk rather than have any other chemicals or smells from the silk produced by a insect or spider.  This additional experiment showed us the same results: the insect pests still ate less when on plants containing silkworm silk or spider silk compared to those with the kevlar or human hair.

All these experiments, combined, tell us that there is something very special about spider silk, and it causes pest insects to eat less plants.  In ecology this is dubbed an ‘indirect’ effect – the spiders do not have to eat a pest insect to cause it to change its behaviour! It is also called a ‘non-consumptive effect’ – meaning the effect of the spider on its prey is not through the act of eating the prey, but rather by changing prey behaviour by other means.  This work is fascinating because it shows that spiders have a much more important role in agricultural systems than we realized before: spiders do not have to be present to cause insects pests to eat less – as long as they were there, and produced silk as they moved through their environment, their potential prey will live in a ‘landscape of fear’.  Or, the insect pest is living in fear of spiders because of their silk.

Here is a more technical summary, placed within a broader ecological context: 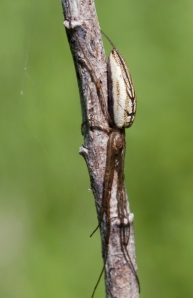 The pest insects (the beetles) in our study system recognize the silk is coming from a potential predator (the spider), and this means they alter their behaviour, or LIVE IN FEAR!  This work fits within the broader literature about the landscape of fear (e.g. see Laundré et al. 2012), or ecology of fear sensu Brown et al. (1999). The idea here is that prey are shifting their behaviours depending on predators, and so the prey’s overall ‘landscape’ is peaks and valleys related to the strength and type of interactions (direct or indirect) caused by the predator.  To anthropomophize this even more: fear induces behavioural changes in prey; they are scared and this fear has real and measurable effects.

Although a lot of this kind of research is with vertebrates, there are some interesting examples from the arthropod world.  One recent example is by Hawlena et al. (2012) – in this work, grasshoppers that were raised in an environment of fear (via continual exposure to spiders whose chelicerae were glued shut) had different Carbon:Nitrogen ratio in their bodies relative to controls, and this affected plant litter decomposition.  So, the ‘fear factor’ changed the elemental composition of grasshopper’s bodies and eventually this affected the decomposition process!  In Hlivko & Rypstra’s (2003) work, a leaf-eating beetle, when exposed to a range of cues produced by spiders (this included feces, silk and other chemicals) ate less plant biomass compared to controls, and the strongest effect was from cues of the largest spider.   Within the context of fear – the largest (and presumably the most feared) spider, can elicit a response in its prey which results in an affect on plant biomass.  Our paper is taking this one more level, and focuses on the silk as a key ‘cue’ that induces the behavioural change in the prey.

Our results show that insect pests that feed on plants in agroecosystems may be living in a landscape of fear that is brought on by one of the most common substances produced our eight-legged friends…the silk.  This silk acts as an important cue for the insect pests and they eat less plant material because of this.   This research also shows the added value of spiders in agroecosystems; conservation of spiders, or even habitat manipulations to encourage spiders to live in agroecosystems, could have many pay-offs.

The study species in our research: Tetragnatha (photo courtesy of M. Larrivee, reproduced here with permission)

Thanks to Max Larrivee and Lee Jaszlics for permission to use their wonderful photographs!