I have just returned from a week of field work in the Yukon – and will report on that in some detail soon.  However, in the interim here is a short story about a lovely jumping spider (Family Salticidae).  This is a story that started quite a few years ago, with my graduate student at the time, Maxim Larrivée.  Max documented that the spider fauna of canopies of the forests around Montreal hosted fewer spiders than the understorey, and a lower number of species than the understorey (Larrivée & Buddle 2009).  However, he also noticed and documented that there were a handful of specific spider species that were more frequently encountered in the canopy compared to the understorey, including a stunning jumping spider Hentzia mitrata.  Here’s a photo, courtesy of Thomas Shahan .  (you can view more of Thomas’ amazing photographs here): 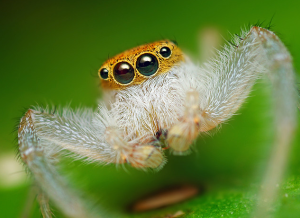 Just recently our laboratory had a publication come out in The Canadian Entomologist on another study of spiders (and beetles) in the canopy of forests at the Morgan Arboretum (Aikens & Buddle 2012). This was work done by my former MSc student Kathleen Aikens.  As one part of her work, Kathleen asked whether there was vertical stratification in beetle and spider assemblages – there was, and in addition to that finding, Kathleen again documented that Hentzia mitrata was more common in the canopy as compared to the understorey – here’s a figure from that paper showing those data: 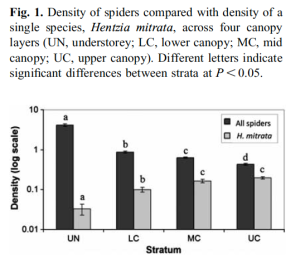 But why?  Why is this species more common in the canopy compared to the understorey?  What does it eat in the tree-tops?  Where does it overwinter?  (our deciduous forest are bare, cold and snowy in the winter!).  As is typical, I have no idea.  We have yet to embark on any life-history study of Hentzia mitrata in the canopy, but it would be well worth pursuing.  In my experience, this species is not all that common in understorey habitats at our latitude, yet there it is, watching us with its big, curious eyes as we enter its tree-top realm: