I’ve spent most of my week in beautiful Anchorage, Alaska.  I was attending a workshop that brought together scientists from Northern countries to discuss an Arctic Terrestrial Biodiversity Monitoring Plan. The goal of this ambitious plan is to include all key taxa, include all northern countries, and find ways to standardize methods and harmonize data.   There were a half dozen bird experts around the table, numerous experts on Arctic vegetation, a large contingent of mammal experts, and one arthropod expert (me).  This is a situation I have been in before, and will be in again in the future – largely because arthropods are not “charismatic” nor do they typically fall into management plans.  Regardless, I welcomed the opportunity to discuss ways that Arthropods can and should fit into large-scale, and long-term monitoring plans in the Arctic (there are, by the way, some tremendous arthropod monitoring programs underway – the Zackenberg research station in Greenland, for example, has been collecting arthropods using standardized protocols for almost 20 years)

The workshop was exciting, challenging, motivating, and overall a wonderful opportunity to discuss the interdisciplinary concept of biodiversity monitoring.   A great example of an interdisciplinary approach was a presentation we heard about using traditional knowledge to understand the Natural Indicators of the Salmon run in the Yukon River, a river that drains out to the ocean in Alaska. This was organized/facilitated by the Yukon River Drainage Fisheries Association.  This presentation highlighted a project where Elders were asked about what helped them understand the Salmon run in the river – a critically important process for people living in this part of Alaska.  I was amazed to hear that for some Elders, the appearance and activity of certain species of butterflies (and sometimes biting flies) was one of the indicators that was used to predict when the Salmon would run.

Yes, you read correctly: Butterfly activity indicates the Salmon run.   The claim that activity of insects relates to the Salmon run is not a direct connection as the insect activity was considered as a “Correlative indicator”.  The observation is that when certain insects appeared and were active, so were Salmon, hence the correlation.  This does make some biological sense as many of the environmental factors affecting butterflies are probably also important to salmon.

The Yukon River Drainage Association went on help to produce a children’s book titled “When Will the Salmon Come?“. This is a richly illustrated, beautiful book that discusses all the Natural Indicators that Elders use to know when Salmon will appear on the river, and the insect activity is highlighted.   A children’s book is a wonderful way to connect with a broad audience. 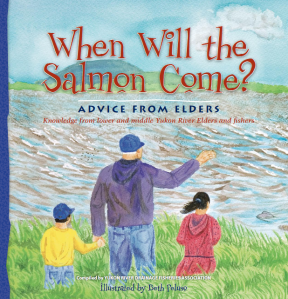 When will the salmon come? (the book cover)

Being a skeptical scientist, I went and searched the literature for anything ‘published’ on the topic of Salmon and butterflies, and I could not find anything.  This does NOT mean it’s not a real and important observation. It means that it is a truly fascinating and curious correlation that was observed by Elders living close to the river, and by people who likely approach nature from a holistic standpoint.  I need to do this more; we all need to do this more. Natural systems are interdisciplinary yet we often study them in silos, defined by a specific taxon or system.

In sum, I was most pleased to be the lone entomologist in a large interdisciplinary workshop  about biodiversity monitoring in the fragile Arctic – my horizons were certainly broadened.  The story of butterflies and salmon made me take a step back and consider how different groups of people can bring different perspectives and all are equally valid.  In other words, keep an open mind, and think of this story when you see some butterflies passing by…they could be telling you an important story – you just have to listen.

4 thoughts on “Holistic views of ecosystems: linking salmon and butterflies”