Last Friday, my Ph.D. student, Alida Mercado Cárdenas successfully defended her Ph.D.  Congratulations, Alida!  This is a really big event, and the entire laboratory is so proud of Alida.

Alida’s thesis is titled “Ecology of beetle assemblages in a Panamanian tropical forest with taxonomic notes on Curculionidae and Histeridae“.  Yes, it is about beetles in the neotropics.  Here are some numbers from her thesis:

40,000 beetles, 73 Families, 355 species or Curculionidae, 112 species of Histeridae.   In case you weren’t already convinced, the tropics represent the heart of biodiversity science. …so many beetles, so little time.  Alida, quite literally, looked at almost 40,000 beetles.  This is stunning, and astounding.   Here’s a photo of her with a small sample of these beetles, and she’s still smiling!!

Alida with a few of her beetles.

Alida’s thesis is ambitious, fascinating and contains some important conclusions:  a) from the beetle’s perspective it matters whether a rainforest is next to shade-grown coffee compared to a pasture, b) beetle assemblages are unbelievably variable in the neotropics – in fact, she often discovered as much variation between her traps within 100’s of meters of each other as between different locations, c) seasonality (i.e., rainy/dry seasons) influences beetle communities, and d) there are a lot of species still to be described – for example, of the 355 weevil species that Alida identified, less than half of these have a name.  To help with this significant taxonomic impediment, Alida collaborated with a beetle taxonomist (Alexey K. Tishechkin)  and described three new species of Histeridae.  This is a wonderful part of her thesis, and showed that it is possible to combine different disciplines – in this case, ecology and taxonomy.

We often hear that ecology and taxonomy are disciplines that fit well together, and I’m reminded of Nicholas Gotelli’s excellent 2004 paper, titled “A taxonomic wish-list for community ecology” (published in the Transactions of the Royal Society of London B).  Here’s a quote from that paper (downloadable from here):

…The best research comes from collaborations between taxonomic specialists and community ecologists who can bring both fresh ideas and fresh analyses to the table, and take advan-tage of the wealth of information that resides in museum and herbarium collections…

It’s one thing to collaborate, but something entirely different to be able to do both.  I would argue that relatively few scientists work effectively (and publish) in both fields – I have tried to do this a little bit, and worked for a couple of years on the taxonomy of pseudoscorpions.  I have, however, never really been able to fully immerse myself in taxonomic research, and I have yet to describe a species.   Alida has clearly succeeded where I have failed.  That’s inspirational, as is Panama: 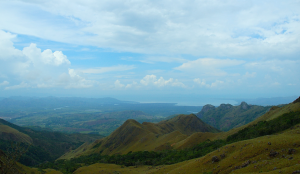 The”official” defense that happened last week represents the end point of a long, productive, and lovely time with Alida being associated with the arthropod ecology laboratory.  I began at McGill in September 2002, and Alida came to do her MSc just a year after I started.  Her Master’s was about Carabidae (ground beetle) assemblages at and near the Morgan Arboretum, and she published two fine papers from this work – one about introduced Carabidae  and another about successional patterns .  After her MSc, Alida successfully entered McGill’s NEO program, and begin her PhD on beetles of the neotropics, with Dr. Hector Barrios as a co-supervisor.  The rest is a successful story of beetles, beetles and more beetles.

Alida is kind, caring, intelligent, motivated, and a very talented academic.  I am pleased (and proud) that she is officially finished at McGill, but I will also miss her. Congratulations, Alida, and good luck with your next adventure!

And to finish, here’s a photo of a weevil (an unnamed one):

An unknown weevil, from Panama (photo by C. Buddle)