Welcome, SPRING, and nice to see you!  It’s a good time for arthropods, and a suitable day to post about a favourite species of mine.

I was inspired to write this post for a couple of reasons.  First, the warm weather is upon us, and with that comes the arthropods!  This past weekend I observed many flies out and about, and bees were busy on early spring ephemerals.  I also watched some lovely spiders becoming more active, including the “Zebra spider“, Salticus scenicus (Araneae: Salticidae).  Second, last week Alex Wild posted a terrific photograph of this darling of a species: 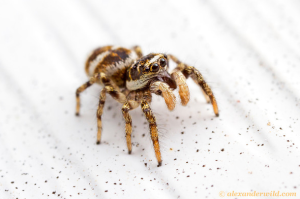 Salticus scenicus is aptly named the Zebra spider given its fashionable black and white “striped” colouration (more like chevrons, but close enough?).  I think, however, that its common name could also be the “window spider” to describe one of its very common habitats (this is where I have frequently watched this species).   The Zebra spider is quite small (< 1 cm in body length), but their personalities are large! In latin, “scenicus” means actor or player, which is appropriate, as this jumping spider is extremely entertaining to watch.  As is the case with most other species of jumping spiders, it has incredible vision (for an arthropod) and uses this visual acuity to seek and align with its prey (from an impressive distance), dart, dance, and, of course, jump.  It feeds on other arthropods, and seems particularly fond of flies (Diptera), and they are often reported to take down mosquitoes much larger than themselves.

Jumping spiders are very well known for their complicated and fascinating courtship behaviours – many of you have likely seen some examples of these on youtube (e.g., http://www.youtube.com/watch?v=4gOiujoR-5o – sound and motion!).  Although I couldn’t find a courtship video of the Zebra spider on youtube, I did come across this rather entertaining video that does nicely show many of the personalities of the species (with a bonus of having some interesting accompanying music…):

Salticus scenicus is most commonly  associated with buildings, and is often seen inside during the colder months.  As the weather warms, Zebra spiders move outdoors, and I have often watched this species move around on exterior walls, especially those with south-facing, full-sun exposure. In my experience it’s rare to find the species other than in proximity to human settlements.  It’s an ‘urban’ spider, and one with some good fashion sense.  Salticus scenicus is holarctic in its current distribution, known throughout Europe and North America. It is often assumed that the species is native to Europe and “invaded” North America, although I have been unable to track down strong evidence to support this claim (can anyone help?).  Salticus scenicus was originally described by Clerck in 1757 (as Araneus scenicus) and in 1758 Linnaeus described it as Aranea scenica. Norm Platnick’s wonderful world spider catalog can give you the full “evolution” of its current name (by the way, it is also the type species for the genus Salticus)

Please keep an eye out for this species!  McGill’s spider collection currently has only two specimens (an immature specimen from Edmonton, and a mature male collected from my house, just off the island of Montreal).  I’m thinking it would be fun to set up an interactive site about this species, and it would be good to get its full distribution in North America all mapped out (the Encyclopedia of life entry for the species does have a map, but the data for NA are quite patchy).  Drop me a line if you find yourself mesmerized by this little beast.